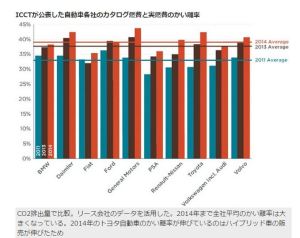 グラフの出典は今回のVW問題の火元となった The International Council of

Shigeru Shoji is the ex CEO of VW Japan.  Shoji was employed by

CEO.  By all accounts he was very successful at growing VW’s

business in Japan, tirelessly visiting his distributors across Japan and

exhorting them to sell more.  His work paid off and VW became the

led to his becoming chairman of the Japan Automobile Importers’

introduction to the Japanese market (the gasoline engine variety, not

the diesel), speculations were rife -- the link provided is a typical one –

Prior to heading VW Japan, Shoji built his career as an employee of

Corporation’s automotive business.  This would mean that he spent

his career exporting Japanese cars and car components to markets

where car manufacturers did not wish to tread directly, finding and/or

sales, and also on occasion setting up car assembling plants.  He

apparently was extremely successful at that, and according to

Ferdinand Piech’s son, who recommended him to VW as a potential

head of VW Japan.  Ferdinand Piech is of course the ex VW

It might appear that the speculations surrounding Shoji’s abrupt

departure from VW Japan were off the mark.

edition, Shoji’s ex boss Uichiro Niwa, who was CEO of Itochu between

[German car] company.  If such amounts of information could well out,

were widespread within the company.  After all in any company, there

are communications at various levels that circulate among top

management and its workers.  Is it possible that top management was

oblivious to all this?”

Although I would not allege that Niwa is not Internet savvy, I am not too

in search of leaks on the VW scandal.

If I am speculating correctly, Japan might have lost an opportunity to

trumpet the strength of, and commitment to its whistleblowing system.